Hello readers! Willow here. A while ago Mummy went to Romania, remember? And, she brought something special back for us dollies, a Romanian dress! It also works as a Santa Lucia dress! Santa Lucia is a Scandinavian holiday – to find out more look at http://www.britannica.com/EBchecked/topic/517701/St-Lucias-Day. 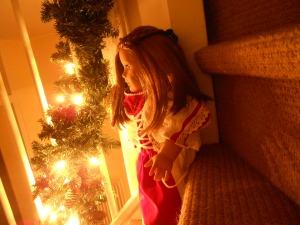 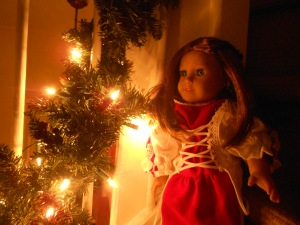 Då i vårt mörka hus/stiger med tända ljus, (There in our dark house/Walking with lit candles,)

Now, let’s take a look at the dress:

The dress is red and white with puffy sleeves. You can adjust how tight it can be and there’s some decorative lace. It’s not a real Santa Lucia outfit and I don’t have a glowing Santa Lucia crown, but it’s not too bad. Grandmummy says that it’s probably traditionally Romanian. Wouldn’t it be so lovely to lounge around all day in this dress? I wouldn’t mind living in Romania…

Have a nice Saturday!!!

Hello readers! Your favorite reporter is back! (Aka, Kit Kittredge!!) Over here at Doll-lightful Days, we just celebrated Sinterklaas! Sinterklaas is sort of the Dutch Christmas. It’s a real big deal! Sinterklaas is a person who looks a bit like Santa Claus, but he has a big golden staff and a pointy hat with a cross on it. His helpers are Zwarte Piete. These helpers dress in colorful clothing and hats and put black powder on their faces. They dance around Sinterklaas and give out pepernoten (a small Dutch cookie associated with Sinterklaas) to children. On the 5th of December, the Dutch children put their shoes out – often with something for Sinterklaas’ horse inside – and later on in the evening, the shoes are stuffed with presents! (To see more, visit http://en.wikipedia.org/wiki/Sinterklaas) It’s a fun holiday… except this time, I was the only one who remembered it!

“Kit… could you slow down?”

“Okay, look. We all need to choose a pair of shoes and set them together in this room and Sinterklaas will come and put some presents inside.”

“What Kit means,” Emma explained, “is that there’s a Dutch holiday called Sinterklaas. On the 5th of December he comes to your house and puts presents inside your shoe. It’s like Santa Claus, only with shoes instead of stockings. This year, we’ve been a bit late, but because he and his companions are in the neighborhood, he may still fill them up.” And then she went on to explain all I just said, which made me a bit anxious because Emma tends to ramble and we might not have had time for Sinterklaas at all. 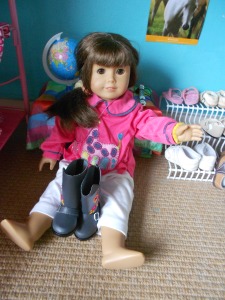 Because this is the first Sinterklaas Amber and Willow have celebrated with us, they got to choose their shoes first. Amber immediately snatched the big boots – “because I’ll have lots of presents that way!!”

Willow chose the 1930’s shoes because she says it was something she and Molly would wear. Hmmm. Must find out who this mysterious Molly is she keeps going on about… 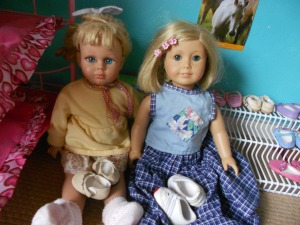 I chose sporty trainers and Emma went for plain sandals.

“OK, now we set our shoes together in a row…” 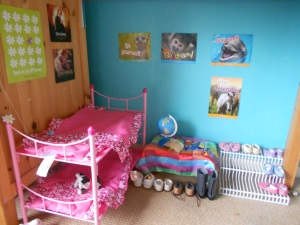 Amber put her shoes where Sinterklaas would see them first, and the rest of us put ours dutifully beside. (By the way, do you like our redecorated room? We find it’s very colorful :D)

We went to another room, and 10 minutes later Amber eagerly went to check…

We filed into the room as Amber cheered: “PRESENTS! Yay, presents are the BEST!” 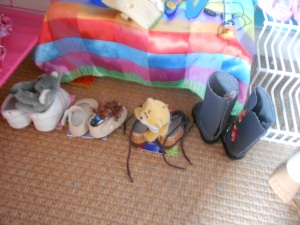 Our shoes were LOADED with them!

Emma, Willow and I unpacked our goodies on the bed. We each got a little toy and an American Girl magazine! We were holding our toys and flicking through the magazine articles when we heard a little sob…

Amber stared down into her shoes… which were only filled with lumps of coal! 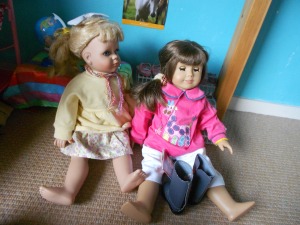 Emma immediately went to comfort her and generously gave Amber her magazine (she knew how much Amber liked them). “You know what, Amber,” she told her. “Maybe you got coal because you looked at the presents more than the family time. Perhaps it was because you focused on personal gain instead of… y’know… the holiday spirit?”

“That’s very very true. I didn’t have as much fun this time because I only wanted gifts instead of being with you guys! You know what, I’m not going to do THAT again!”